What We Can Learn From WordPress Acquisitions: An Overview

You might be surprised to learn that WordPress has changed hands over the years. Here’s what we can learn from WordPress acquisitions.

The WordPress ecosystem is a dynamic one, even in the context of IT. Users know about the thousands of plugins and themes available on the platform, but what happens behind closed doors is just as interesting. Let’s talk about WordPress acquisitions.

This article has a table listing all known acquisitions. Check it now.

Why Are WordPress Acquisitions Relevant?

The last 13 years saw at least 28 major acquisitions, with 10 in the last two years alone.

M&A Operations such as these may represent shifts in the market and showcase interesting numbers. Hundreds of thousands of users are affected.

You might not have noticed but, if you are a WordPress user, chances are you used a platform that has had more than one owner.

It’s more than likely a lot of money is involved. Unfortunately, only two operations have reliable disclosed amounts: Automattic purchase of Tumblr in 2019 for $3 million, and that of WooCommerce in 2015 for $30 million. 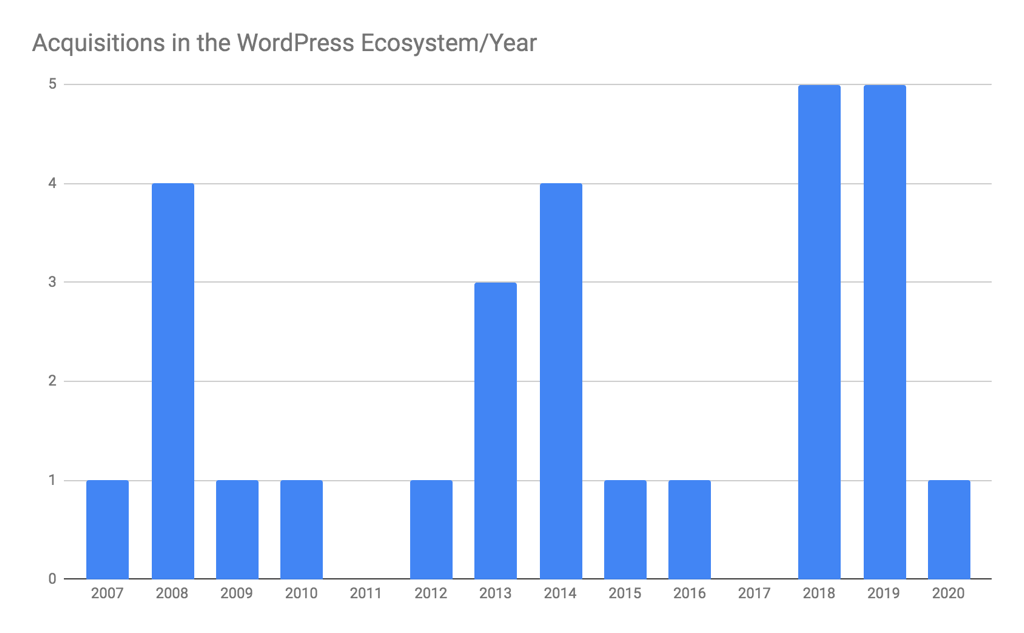 Who is Buying Who?

Unsurprisingly, Automattic, WordPress’ parent company, takes the cake. At the time of writing, the company is valued at $3 billion, and responsible for 20 out of the 28 operations.

These include at least 10 high-profile acquisitions, including Longreads, BruteForce/Jetpack (2014), WooThemes/WooCommerce (2015), and Tumblr (2019). It’s also the owner of the social media platform BuddyPress since 2007, along with the spam-killer system Akismet.

GoDaddy, valued at $2.988 billion in 2019, bought WP Curve and SkyVerge (including its 60 WooCommerce extensions).

What Motivates the Acquisitions?

The simple answer is potential increase in revenue and market share, of course. But we can go further than that and pinpoint specific intended benefits in the WordPress ecosystem.

Due to the sample, most examples come from Automattic. A review of the statements provided to the market show that common motivations are:

One of the major benefits is integrating a user base (sometimes a huge one!) that has been cultivated over the years. For example, Simplenote reportedly had 750,000 users when it was sold to Automattic in 2013.

Automattic is a showcase of migrating adapting functionalities to one own’s platform. For example, it bought IntenseDebate (2008) for its enhanced comments system, Cloudup (2013) for its media library upload system, and ZBS CRM (2019) for its CRM capabilities.

The famous “acqui-hire”. Assimilating staff can dramatically cut costs in training and hiring.

Automattic bought Longreads in 2014 with the promise that its staff would join WordPress’s editorial team. Those were workers used to the tools, processes and guidelines involved.

A quote by Automattic CEO Matt Mullenweg on why Automattic purchased WooCommerce makes it obvious. “They [WooCommerce] have a full team that goes to bed every night and wakes up in the morning thinking about commerce; it’s core to their DNA … That’s better than starting it in-house,” Mullenweg told WPTavern.

This motivation is, understandably, never made public. However, it can be seen as the direct effect of some acquisitions. For instance, when Automattic purchased Atavist in 2018, it explained the Atavist CMS itself would be integrated into WordPress.

An interesting case that sums all points above is the purchase of WP Curve by GoDaddy, which included “customer base, assets and ‘a few dozen’ of its 39-person team, as reported by TechCrunch.

What We Can Learn With WP Acquisitions

WordPress is not a closed ecosystem…

A handful of acquisitions were made by companies that are not directly related to WordPress. Case in point, GoDaddy and Liquid Web are hosting providers and still invested in WP companies

WordPress is profoundly tied to its parent company, which performed 70% of the acquisitions. This is logical and not seem in all markets.

The Institute for Mergers, Acquisitions and Alliances (IMAA) estimates that 2019 alone saw almost 50,000 mergers and acquisitions worldwide, with a combined value of over $3 trillion. Given this context, the WP market is short of causing no impact.

Acquisitions can generate good PR, which is essential in WordPress

The WordPress market is saturated, partly because, unfortunately, many companies offer low-quality solutions. With so much noise, building a positive reputation is key. A positive example: the purchase of Parka by Automattic in 2019 was announced as a way to offer the Parka’s BlueProtect plugin free.

“The BruteProtect plug-in is currently used on about 110,000 sites, but with this acquisition, WordPress will not only make BruteProtect’s premium service available for free, it will also include it in its Jetpack service,” said Automattic.

Ideally, the operation should not affect the end-user – they want the product to work, no matter the owner. As a result, it’s primordial to relay any upcoming changes in features or support as clearly as possible.

Example: When Elementor announced it was buying the WP Layers theme company in 2018, they took pains to ensure the community would be up to speed. This is seen in their announcement post Elementor Acquires Layers WP.

Firstly, it is crystal clear on a decision that might upset its users: Layers users would only have full support for two months more “After that time period, support will be handled by the Layers user community.”Secondly, the company actively engaged with user queries in the comments section, replying to every question.

The result, as seen in that space, was overwhelmingly positive.

WordPress is a dynamic market with one single big player: its parent company, That’s to be expected, but it’s certainly exciting to see and study high-profile M&A operations that rock the environment.

The last couple of years seem to show an increase in the number of operations. Maybe that indicates more interesting news to come?

Acquisitions in the WordPress Market

The table is too big to show on mobile. To see the table of aquisitions visit this page on desktop.